Year after year The Rock and Roll Hall of Fame overlooks one of the best selling, most talented, internationally known female vocalists of all time- Miss Connie Francis!

Even CHRIS ISAAK says, "When they let Pat Boone and Connie Francis in the Rock and Roll Hall of Fame, they'll balance it a lot more," Isaak said. " They're looking for the obscure, black, blues side of rock 'n' roll, and that should get mentioned.

"But does that mean Connie Francis shouldn't be in there? Hell, I make the argument that she's the best female vocalist to ever come out of America. I don't think there's anybody who can whup her. She can just flat-out sing. Sure, you can like somebody else's style, but she's got chops for days."

Let's take a look at some of Connie's credits and why I call the RRHOF  "The Rock and Roll Hall of SHAME": 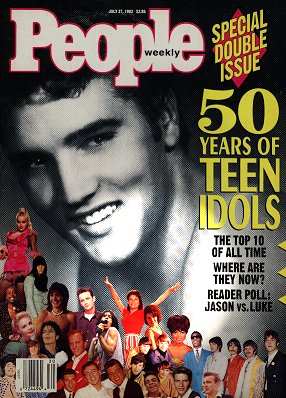 -It is documented that Connie Francis was the first female recording artist to have a rock and roll million seller, Stupid Cupid.

-In 1967 Connie Francis was named Best Female Entertainer of the Century.

-The only recording artist to be voted Number One Female Singer

-Connie Francis has had 10 consecutive top ten singles within a 2 year period.

-Connie Francis has recorded in many languages including Italian, Spanish, Japanese, Jewish, and German to name just a few.

-Connie Francis broke the male domination of the Rock and Roll charts.

-In a two year period, from 1958 through 1959 Connie Francis has received a cornucopia of awards and honors, including:

You can view more of Connie's awards at my "Awards Received by Connie Francis" page.

Connie has also been involved in many charitable causes, including help for rape victims, and The Heart Fund.

Connie Francis has been on the charts with the likes of Brenda Lee, Elvis Presley, Chuck Berry, Bobby Darin, and many, many more inductees to the RRHOF.  If you check out the covers of teen magazines of the 50's and 60's you will see Connie Francis posed with one star or another or by herself with captions like The First Lady of Rock and Roll, and The Sweetheart of Rock and Roll, or America's Sweetheart.

Connie is an International star.  As late as 1977 her greatest hits album was #1 in England.  She is loved in Germany and adored in Italy.

This is only a few lines about the contributions Connie Francis has made not only to Rock and Roll, but to all kinds of music.  Not only is she a Legend,  she is a Survivor!  Through many personal tragedies she has always bounced back and is still going strong today selling out practically every appearance she makes, receiving numerous standing ovations.

Those of us who have written to the RRHOF asking why Connie is overlooked every year have never gotten a reply.  Could this be because there IS no Reason?  Why has Connie, who has shared the top of the charts with
Elvis Presley and Aretha Franklin, not been inducted YEARS ago?

If you feel compelled to do so, write the "Rock and Roll Hall of SHAME" and express your opinion! 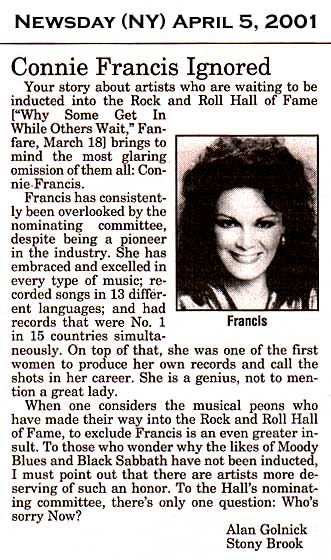 Back to The Incomparable Connie Francis Directory